To be in business for 125 years takes a lot. To put this in perspective the timeframe would include the Great Depression, two world wars and the Cold War.

Talk about withstanding the test of time.

Beyond this obvious mayhem, people in the last 125 years would have also experienced many major technological advances. Televisions, computers and cell phones all came to fruition and have completely changed our lives.

With innovations such as these causing constant change, one thing that would have remained constant is people's need for consistently reliable outdoor apparel and their love of tasty beer.

Filson, masters of outdoor apparel and bags, is currently celebrating its 125 year anniversary, and to commemorate its success they have announced a partnership with Stillwater, nomadic brewing venture.

Filson and Stillwater, A Match Made in Heaven For 125 years Filson jackets, bags, hats and more have been the model for what quality gear should be. They have pushed boundaries and created products that were both revolutionary and timeless.
Similarly, Stillwater Artisanal Ales was formed in Baltimore in 2010 under the guise of brewing beer that challenged the norms. Since then, their nomadic brewing project has taken them worldwide, where they have taken classic beer styles and brewed them anew.  Today, Stillwater has landed at its permanent location in Mound, Washington where they continue to reimagine what beer can be.
For these reasons, Filson and Stillwater are a match made in heaven. Cut from the same cloth, both brands create products deeply rooted in craft and tradition, while pushing the boundaries of innovation.
“Filson’s dedication to creating the highest quality products, coupled with Stillwater’s limitless passion to revolutionize flavor in beer, results in five, irresistible brews aimed at celebrating life’s greatest moments,” said Alex Carleton, Chief Creative Officer at Filson.

To celebrate 125 years of success of Filson, a Seattle-based outfitter, and Stillwater has brewed a collection comprised of five crisp beers. Each brew toasts a significant era that the iconic American heritage brand has gone through.
“The five beers in the collection are nostalgic – transporting us through the deep history of American heritage brand Filson,” said Brian Strumke, founder of Stillwater. “We are proud to partner with Filson for this milestone, and cheers to the brand’s next 125 years.”
With something for everyone, the Filson x Stillwater collaboration has kicked off with the following two beers this fall. The remaining three beers will be released in 2023.

Tasting Your Way Through 125 Years Filson Rustic Gold IPA
Paying homage to Filson’s Seattle roots and the history of the Pacific Northwest, this West Coast-Style IPA pulls inspiration from the Scandinavian influence during the turn of the 19th century. Kveik, a robust Nordic farmhouse yeast that was often dried after use for storage or passed to others, such as a bread starter, when fermented produces unique citrus esters that perfectly compliment the fresh pine and grapefruit notes of the hops. After fermentation, the Filson Rustic Gold IPA is dry-hopped and unfiltered for a bold rustic hop experience. 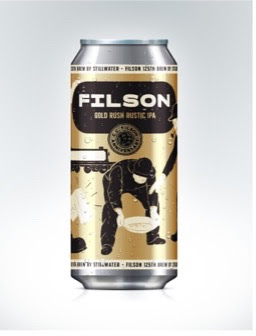 Filson Maritime Gose
While the historic German Gose style dates all the way back to the year 1000, the slightly sour ale saw a major resurgence in America in the last decade. Given its use of sea salt, the style is perfect to commemorate the Maritime era of Filson. Stillwater conducted an overnight souring process to the base before returning to the Kveik to complete fermentation. The Filson Maritime Gose features a tart, wheat base with notes of citrus, pine, and fresh grass and a dry, clean finish of pure Pacific Northwest-harvested sea salt to evoke elements of both land and sea. 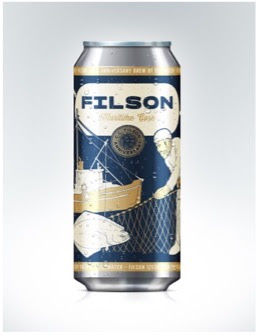 All About Après doesn't have the longevity of Filson or, even Stillwater. I'm not even sure we have the cache either. But, our après ski clothing is good quality, comfortable and a whole lot of fun. Like our Après Ski Team Ski Hoodie. Filson and Stillwater are a great team. So too is the après ski team. No boundaries, just good times with good people. Who doesn't love that?

If you enjoy drinking great beer while reading our après everything gear review blog then don't miss another post. Subscribe today and get all our updates delivered right to your inbox.